Bates-Hendricks is a neighborhood that’s sure to keep you fit with its outdoor amenities. East Street is lined with bike lanes, making simple for you to cycle to the downtown area. Pleasant Run Trail is another feature used for cycling along with walking, jogging, and rollerblading. You’ll find the trail near Pleasant Run Parkway following the course of Pleasant Run Creek. This community even has six parks, providing you with plenty of green space options. Garfield Park is the oldest park in the city and named for former United States president James A. Garfield. Some of its amenities include an aquatic center, a garden, a conservatory, and more. If you love reading, then you’ll love the fact that this community has two libraries, so if you’re looking for a book that’s been checked out at one library, you can go to the other one to find it. Lucas Oil Stadium is where you can see the Indianapolis Colts home games. You can also go there for concerts and other events. The Indianapolis Zoo is a great place for all ages. The zoo includes an aquarium, a garden, play areas, rides, and other attractions. Bates-Hendricks has two schools in the area: one public elementary school and one charter school.

Bates-Hendricks real estate properties include single-family houses, apartments, and condos. These Bates-Hendricks homes contain zero to four bedrooms and one to four bathrooms. Some areas have open lots for you to design your own dream home. The properties here vary in price and age and measure between 1,000 to 3,000 feet. Make the decision to move to Bates-Hendricks. It has many green spaces that provide peace and exercise while giving you easy access to Downtown Indianapolis. If you have questions concerning land or homes for sale in Bates-Hendricks, Indiana, please contact us today.

Stunning remodel with NEW EVERYTHING. Don't miss your shot at this. Come see what all the excitement is about in Bates Hendricks.

Bates Hendricks Beauty. This newly built home has all the amenities you have been looking for and more. Each of the 3 bedrooms is an en suite. Juliette Balcony off one, D...

Completely Updated One Level Home In Bates Hendricks-Completely remodeled down to the studs-All high end finishes with lots of attention to detail. New deck built off the...

Glorious Brick Stately Home is a pillar of Bates Hendricks. Original wood floors and trim throughout this incredible home will have your heart swooning. Some great featur...

Spacious home in the heart of Bates Hendricks, just miutes from walking to the Fountain or nearby restaraunts. This 3 bedroom home with 2 full baths has it all including ...

Charming 4 bedroom 2 bath located in the historical Bates Hendricks neighborhood! The location of this home is perfect whether you want to go to downtown Indy or Fountain...

COMPLETELY RENOVATED! Located in Bates Hendricks and minutes to downtown Indianapolis. This duplex has 2 bedrooms and 1 bath on each side. Living room, dining room and ki...

THIS is the three bedroom two bathroom Bates-Hendrix home that you have been looking for! 303 Morris has the perfect blend between modern and industrial finishes with sub...

BATES HENDRICKS: excellent value on a full-size (37'x142') lot that is ready for a home. Don't let the topography fool you--there are plenty of design options that will m...

This gorgeous Bates-Hendricks cottage is an easy 10-min walk to Fountain Square's bustling Shelby St and 5-min walk to Eli Lilly (yes we timed it). So many of your favori...

Incredible complete renovation of this popular Bates-Hendricks home. Taken down to the studs, this home with 9’ ceilings and tons of natural light with its open floor pl...

Information Deemed Reliable But Not Guaranteed. © 2020 Metropolitan Indianapolis Board of REALTORS® 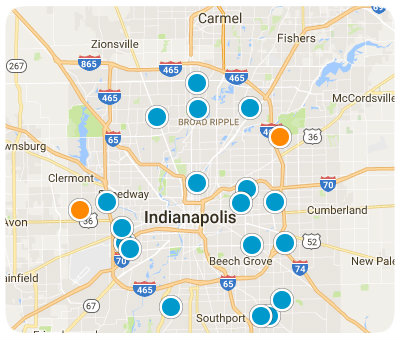